Home Blog The Most Famous Person to Never Become Famous

The Most Famous Person to Never Become Famous

The Most Famous Person to Never Become Famous

Comedy is the only thing I’ve been able to take seriously.

If I ever needed a sign to engage me further into playfulness and the Trickster archetype, and how they both relate to politics and culture, I could certainly take cosmic brio from the fact that Lord Richard Buckley (1906-1961) and I share an April 5 birthday. For he was the most tricksterish character ever to walk this world, the Force was strong with him. You may have never heard of him, but among entertainers from the 1940s to the 1980s, he was legendary.

Buckley inhabits an essential chapter in Tricking Power into Performing Acts of Love, and as my birthday present to you, I’m offering a free eBook copy of Tricking Power to anyone who preorders a softcover from Barnes & Noble this month (April). Just click THIS. HERE., order a copy, and then send me an email at contact@shepherdsiegel.com. I’ll send you a code for downloading the book. If you’re busy, just put “free eBook” in the subject header. Or you can drop me a line, let’s chat. With this free eBook, you can start reading Tricking Power before yer Jumpin’ Jehoshaphat paperback copy arrives around May 31.

Dick Buckley was born in 1906 in the rural town of Tuolumne, California. “I had a very auspicious beginning,” he recounted. “I was attended by a midwife and, because I was very slippery, they made a grab for me and missed, and I hit the john—BOOM! They fished me out and wiped me off. I don’t think it’s harmed me any.”

He never stopped being slippery either.

The seventh son of a seventh son, he and one of his sisters would busk in the streets from a very early age. His talent for acrobatics and mimicry and his ability to hold an audience’s attention developed early.

By the mid-1930s, he’d found his way to Chicago, working as an emcee in dance marathons, called walkathons. In these Depression-era competitions, couples would dance until they dropped, and the last ones standing would win the prize money. You may have seen the 1969 film They Shoot Horses, Don’t They? which is set in a walkathon.

Buckley’s job was to keep the audience entertained as they watched the dancers shuffle on the floor and eventually collapse from exhaustion. He worked ten-hour shifts and so had time to develop his improvisational skills and gimmicks, like swinging from a rope over the audience and pelting them with eggs. But this was only the beginning. He also performed in vaudeville and night clubs.

He was gangster Al Capone’s favorite comic. Capone loved him so much he bankrolled a nightclub for him, Chez Buckley. On opening night, Capone is there with his henchmen and their molls. Buckley’s drunk. And he realizes that he hasn’t prepared. He goes on stage and just for a moment, he freezes. Hang in there with me, you won’t believe what happened next. Buckley was perhaps the greatest influencer of popular culture in the 1940s and ’50s and beyond. He was a comedian. And a troubadour, visionary monologist, gadfly, prankster, con man and hero. He was the original hipster, a mooch, philosopher, outlaw, griot, recording artist, ladies’ man, proto-hippie, proto-beatnik, proto-New Ager. A hustler, pothead, healer, drunk, evangelist, loser. Lord Buckley was a guru in his own mind . . . an inveterate rascal and a trickster writ large.

His whole life was lived in perpetual answer to the trickster question, Wouldn’t it be fun if ___? and he took that mischief trait a step further, playing with group dynamics and starting a movement to explore what unexpected magic could happen when people gather? All the while he’s preaching, “I’m a people worshiper. I think people should worship people. I really do.”Ï

He was deeply loved by his close followers and friends, the Royal Court, and throughout show business, admired for his creativity. And this he achieved in the midst of what might be considered his mission quest: how much pranking can one guy get away with? His tricksterism inspires all those who seek to lubricate the joints of an arthritic society, to make it a better, nimbler, funner place.

Did he affect a British-styled accent and aristocratic air while at the same time introducing Black vernacular to white audiences? He did. Did he help to invent “jazz comedy” that incorporated the rhythms of jazz in a stream-of-consciousness storytelling style? He did. Did he take antiracist stands and draw attention to ongoing racist practices when such messages were unwelcomed? He certainly did. Was he the first hippie and an inventor of Beat consciousness? Yeah, could be. His more tangible products, his records and his few videos, just residue, inform the fuller picture we get through the memories of those who knew him. Buckley was a great experimenter, leading a radically imagined and radically loving life. Nonconformity in his case is not a performance that is against convention, but one that proposes new directions.

This is just a small taste of the guy who became close friends with Ed Sullivan, doing USO tours with him during WWII; who was one of the first people to take LSD under laboratory conditions; who made the first comedy records and invented a standup style that heavily influenced Richard Pryor and Robin Williams; who preached love and communal living and drove a VW microbus in the 1950s. Though he would die in 1961, he kind of invented the Sixties. His jazz artistry and the substance of his monologues were relevant to race in America in the forties and fifties. In a word, he had enormous if subterranean influence on American consciousness, imagination, language, style, and utopianism.

And oh yeah, that whole thing at Chez Buckley in front of Al Capone and his gang? Well, the good Lord Buckley broke out of his momentary stage fright and collected the fur coats of all the girlfriends—just to borrow them for a moment. He then made a pile in the middle of the stage, doused the coats with lighter fluid, and burned them all. He hightailed it out the back door and got on the next train to New York . . . and that’s how his first residency in Chicago ended. Capone thought it was hilarious and bought everyone new coats.

If this tiny taste of Buckley, if it’s all too much, or if you can’t get enough, if a fuller picture of this startling hip messiah is your wont, it’s fulfilled in my new book, Tricking Power into Performing Acts of Love, available in eBook format now, and beautifully printed on real paper, available May 31. Stay tuned here: www.shepherdsiegel.com 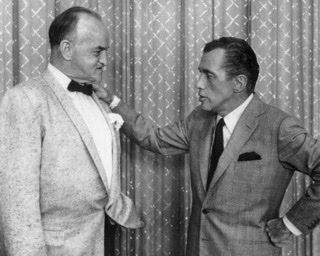